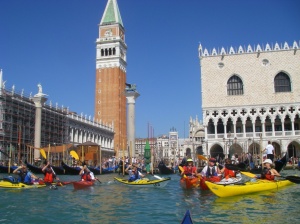 Certosa is the starting point for a canoe trip along the lesser canals of Venice, down the Grand Canal and in the Lagoon, following the routes below accompanied by a guide. Ideal for those already confident in a kayak.

•The heart of Venice. From Certosa to the Castello district where the Arsenal is situated, passing through San Giovanni e Paolo and Campo Santa Maria Formosa. You reach the Grand Canal and canoe in and out of the city’s inner canals through the areas of Frari, Campo Santo Stefano and Campo Sant’Angelo as far as Punta della Dogana, to return to Certosa via the Biennial Gardens.

•The lagoon islands. From Certosa, a canoe trip towards the islands of Sant’Andrea, Sant’Erasmo, Lazzaretto Nuovo, San Francesco del Deserto, Burano, Torcello, Mazzorbo, Madonna del Monte and Vignole, then back to Certosa.

•By the light of the moon. From Certosa by kayak at sunset towards the Grand Canal, canoeing through the part of the lagoon near the island of San Michele, to reach the canals in the area near St. Mark’s and the Bridge of Sighs during the evening, then back to Certosa through the inner canals.